CIA’s bell box was featured in the Mail Online this week in an article about the ‘Burglar Alarm Britain’ blog (read the article here) and a day or so later, the popular technology website Gizmodo also took up the story (here).  Ever since, the family have been inundated with texts, e-mails and social media posts.

The Burglar Alarm Britain blog – brain-child of 40 year old Vici McDonald – features photographs of hundreds of old intruder alarm boxes from around the country and has been a surprising internet hit.  Vici, who comes from an art design background, is fascinated by the naive designs to be found on alarm boxes and argues that they are pieces of urban art.

I first became aware of Vici’s blog back in 2011 when she commented on our Crooked Man logo.  At that time she said, “Everything about CIA alarms is utterly classic: the strident colour, the tabloid typography, the furtive figure.” She went on to say, “According to their excellent website, this “crooked man” logo – one of my favourites, and still in use – was designed in 1970 by Janet Christie herself. When amateur burglar alarm-spotting friends come to me with exciting alarm designs they’ve stumbled across, it’s often this one, because it’s so amusing and noticeable.”

I entirely agree with Vici; it is a classic and I personally credit much of CIA’s early success to this eye-catching logo which my mother, Janet Christie, designed when she and my father, Barrie, set up the business over forty years ago.  I feel the combination of amusement and noticability was just the right balance, and subsquently, it made it’s way into the public psyche.

CIA is the largest independent security installer in the UK and there are over 50,000 of our sounder boxes throughout the South.  However, the discerning among you will notice that the logo looks a little different these days (see below).

I took inspiration from a video I made as an assignment towards a Masters degree in Creative Technology and Enterprise at the University of Portsmouth in 2011, (click thumbnail in the margin to watch the video in question).  The finished logo looks a little different than the early draft at the end of the video but the silhouette of the actor in the video, a dance student at the time, formed the basis for what Vici labels the “shadowy intruder”. 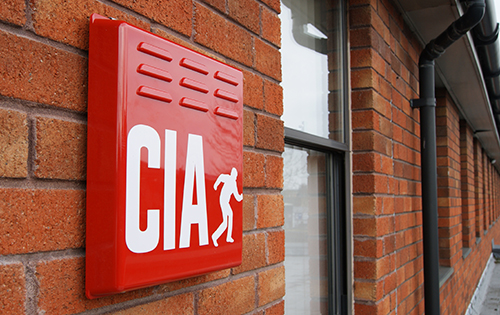 Returning to The Mail’s article, I was struck by two things, firstly, how tatty the boxes looked on the whole and secondly, the number of companies whose boxes are featured that have ceased trading.

CIA has gone from strength to strength, of course, and although our box didn’t look too bad, in defence of the others it should be noted that it is customary within the industry to replace tired looking bell boxes (something we’re very particular about doing) but only if the customer has a maintenance contract.

Old alarm boxes are rarely a problem for the big national installers, because generally they rent their equipment and remove it if a maintenance contract lapses.  The problem for companies who sell their systems is, the customer owns the alarm outright and if they choose not to take out a service contract, we have little or no further contact with them and there is nothing we can do about those old relic boxes.

We sell our systems outright because we believe it’s better for the customer, but that’s a whole other story (read it here Treat me fairly and honestly).

When it comes to CCTV you get what you pay for

Treat me fairly and honestly!

We are members of the Trading Standards approved 'Buy With Confidence' scheme which means that we operate in a legal, honest and fair way so you can be confident when buying from us.